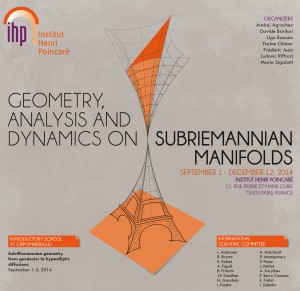 The purpose of this trimester is to create a link among different communities working in sub-Riemannian geometry from different points of view and in particular among people working in the theory of hypoelliptic operators, in optimal control and in geometric measure theory.

Sub-Riemannian geometry is living a period of renewed interest, imposing itself as an extremely rich and original framework where to study geometric analysis, geometric measure theory, stochastic calculus and evolution equations. Besides that, sub-Riemannian geometry plays now a role in completely new applications such as image processing, neurophysiology and quantum control, and its potential in these areas is far from having been fully exploited yet.

The trimester will mainly focus on mathematical aspects of sub-Riemannian geometry. However, two workshops will be devoted to applications: one to applications in mechanics (motion planning, robotics, nonholonomic mechanics, quantum control) and the other one to image processing, biology and vision. Other two workshops will be organized on analytic and geometric aspects of sub-Riemannian geometry. We also plan several master courses, thematic days and seminars.